This must be the correct way of saying: “I have faith but don’t subscribe to a particular faith.” What does that exactly mean? Suppose you applied that logic to money: “I have money but I don’t have cash, assets or available credit.”

The more popular, vague and confusing statement to ignore this previous discussion is the ultimate closer: “Organized religion is no good! It’s outdated! Evil! A means to control you! By golly, if there was never a religion- there would be no wars!”

If that were the case, wouldn’t every dictator in world history be a religious one rather than a secular one?

But let’s go ahead and zoom into the words religion and religious.

a : the state of a religious
b (1) : the service and worship of God or the supernatural (2) : commitment or devotion to religious faith or observance
2 : a personal set or institutionalized system of religious attitudes, beliefs, and practices
Religious:

1 : relating to or manifesting faithful devotion to an acknowledged ultimate reality or deity

2 : of, relating to, or devoted to religious beliefs or observances

Every time the world makes something seem “cool” – I invite you to question it. It appears at the moment in world history, we are witnessing a slingshot pull away from the secular trend that dominated our globe since the 1960s.

We’ve seen a flirtation in the United States on creating a pure secular society with Thomas Paine of the 18th century. This is why the US Constitution has a very secular tone to it due to the time of its execution.  However, with the tragic events of the French Revolution, Americans who were watching from afar quickly turned back to God.

People today are now questioning the main stream narrative about a secular society being the best fitting. When a woman has an abortion in the United States (paid by the tax payers!) it is such a controversial moral issue that cannot be solve with a simple vote. Another important aspect is, within a secular society, free speech and religion (which go together) are conflicting the “community.” Which stirs the discussion: should America remain free with some being winners and others being losers? Or should the government set the tone? Decide what is right? Make everything more “fair”? More progressive? (Although nothing new about this new suggested government structure.)

Surely I am in favor of a moral and religious people, like the founders of America. But like the religion I follow, I believe in freewill. Which again, the founders of America favored as well. Therefore, America has no state religion but hopes for a religious people to remain. *Please note that the term “Separation of Church and State” is no where to be found in the US Constitution. But first seen in a private letter from Thomas Jefferson referring to the states not to favor a particular Christian branch.

The idea of electing to commit to a organized religion is a personal decision and should by no means be forced upon- through the state or church. At the same time, one should not mock, discourage or ban the individual’s right to part take or one who shows a slight interest on religion- which tends to be the current wave of the time: Quiet interest yet a public mockery if discovered you are curious about the Bible.  Furthermore, the secularist tend to go and mislead on religion’s role throughout history. (Unless if they are discussing the negative conduct of the people who practiced a religion.) They discredit the faith of Sir Issac Newton. The pagan religion of Julius Caesar and his massive Republic. Mozart. The art of the Renaissance, buildings and the Brooklyn Bridge being constructed by a Christian man. Countless authors, businessmen, doctors etc who were very religious men.

The truth is religion played a important part of these men’s lives who built Western Civilization, and it shouldn’t be scrubbed out of history.

When the current wave is religious, I invite you to question that as well.

Man is flawed, only God is good. Man is just a mortal. (Surely, man can do both impressive and devastation to the world- hence we are created in His image. This doesn’t mean man is always correct. It simply means he is the best creation from the Creator and should not abuse his power the Lord gave him over the earth.)

Understand I weighed out the corruption in everything man touches. In both religion and secular institutionalized systems. My observation, similar to Ben Franklin’s analysis – is when God is absent from man, the world is in complete  darkness and cries for hunger (both in the physical and spiritual) are heard throughout the earth. There is no good when that happens.

The Bible mentions Temples, an early church and gathering places for worship, prayers and fellowship. Technically, if you are reading the Bible with a friend at your home or park- you are participating in a organized religion! A date, time, place has been arranged and the scriptures are being read. The term “organized religion” has a reputation of being linked with the Vatican Church. Yet, it is not correct to give it that definition rather then:

20 For where two or three are gathered together in my name, there am I in the midst of them.” Matthew 18:20

An interesting root on the origin of the word ‘religion’: supernatural constraint.

We are called to become supernatural- not the common basic mediocre natural and certainly not lower than ground, that is associated with death . We are called to have constraint.

That is hard stuff! To rise above nature? Yes! It’s in our very creation:

Then the Lord took dust from the ground and formed a man from it. He breathed the breath of life into the man’s nose, and the man became a living person. – Genesis 2:7

Everything in life that is great should be a challenge to obtain. The more you work on it, the less difficult it becomes and the more easier life can be.

When a person decides to get involved within bodybuilding, that requires supernatural constraint. Bodybuilders live in a “religious mode” to be successful for their lifestyle. They must commit to its “commandments” in order to triumph. It’s difficult, requires sacrifice, a temple (gym) and a very strict eating ritual. It may seem outrageous to the common potbelly Joe. But the lifestyle actually becomes pretty natural to the bodybuilder over time. Then the bodybuilder must challenge himself once more to see newer results.

Like the bodybuilder, I need the religious disciple. I need the bar set high- even if I fail. Expectations are required. A certain conduct is proper for high character. If I try to take the Bible seriously and exercise (no pun intended) those commandments into my life- my life will be easier in the long run. I will hurt less people, including myself.

Anytime I go into something, I want the full on service. Churches today seem to lose the religion biblical quality and has turned into a “safe space, politically correct, motivation speech therapy session.”

This is not true religion.

Just like a overweight fitness trainer, I don’t need more methods on how to eat. I am already master at that. For the Joel Osteens, I don’t need the “follow your heart” rhetoric. Following my heart gets me into massive trouble. 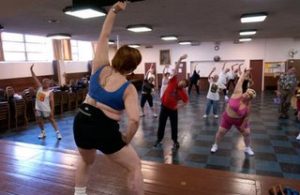 What I need is the truth: life is hard. But you can smile because God had created you, wants you and your life has a purpose.

To keep me structured, re-mindful and striving towards goodness, I need a formal religion to ground me. Alone prayers are great; I can talk directly to God without a third party. The other  outlet of learning, growing and understanding is working with His children. The great thing is to witness God’s work in other people right in person. He didn’t forget us!

Grooming yourself, setting a time, a place and gathering with others to read the scriptures brings us closer to God and further from ape.

Being part of a organized religion can help in your journey with God. After all, God did command law and order. Instructions and guidelines. Rules that disrupt our low character for we may become higher beings. The Lord also understands that His commandants are difficult to keep. What I recognize is the God of the Bible doesn’t withhold blessings or punishments from us nor does He allow it to nestle with us forever. (Which shows us He is compassionate. Hey, if you want the bicep to stay, you have to keep pumping iron!)

We will enjoy the fruit of our labor, we will be punished when we deserve it. Then there are times when it appears unexplained punishments (or blessings) will occur and it may seem unfair. That too will pass!

Remember the truth: life is hard. But it doesn’t have to be harder because God is with you.

10 thoughts on “Why I need organized religion”