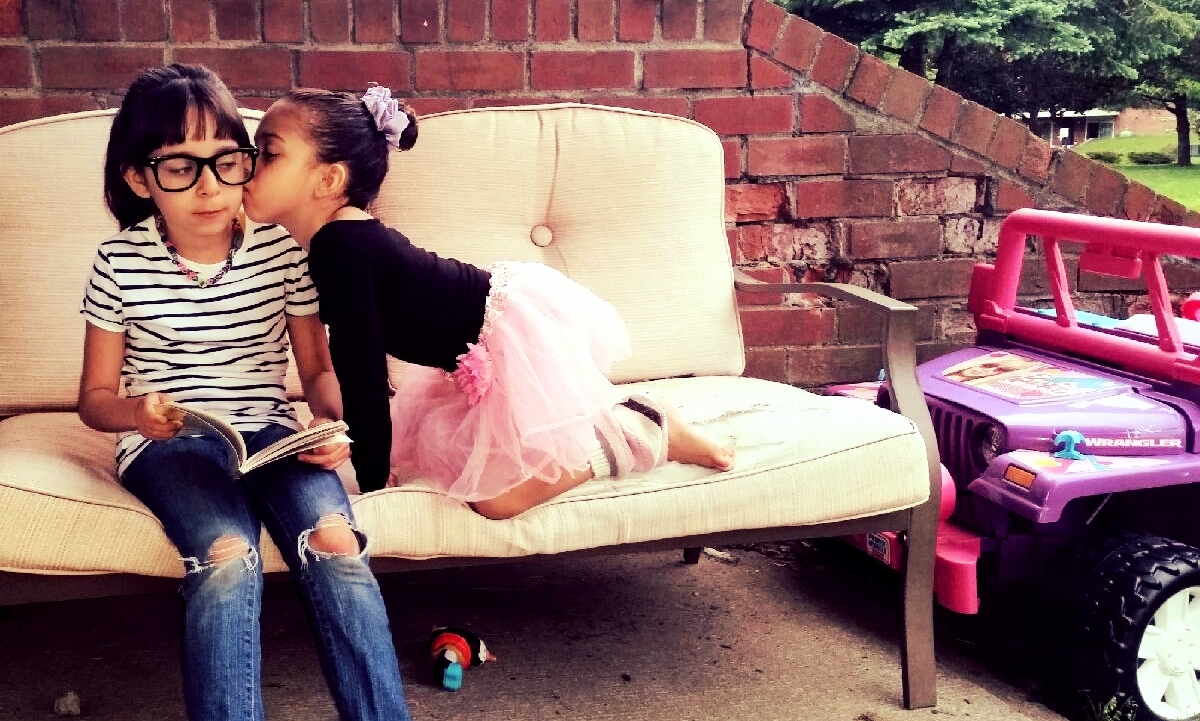 “Be devoted to one another in brotherly love. Honor one another above yourselves.”   Romans 12:10 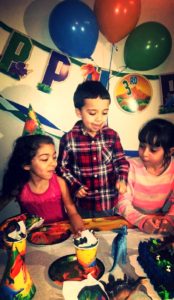 Often when one thinks of a sibling, “love” doesn’t immediately come to mind. Despite if that was the reason or intention of the relationship.

What we do frequently hear, is about the infamous “sibling rivalry” instead.

Joseph and his brothers.

Even out of the Bible: Cleopatra and Ptolemy XIII or King Richard and Prince John.

Then there are sibling relations that are less heard of and overall- clean, happy and healthy.

But extremes to aside, let’s meet somewhere in the middle. Many sibling relations could be sum up into: I hate you, but I love you.

As a mother, I have encounter my children on multiple occasions expressing both great anger and great satisfaction from their sibling. If you ask any parent on what pains them the most when it comes to their children is: fighting. Not getting along.

Could you imagine what the Lord must experience when he sees His children go at war with each other? It’s painful! This is why He commands us to love on one another. This is what separates the West from the East. To take this Proverb seriously: Do onto others what you would want to be done onto you.

When Jesus was asked: What is the most important law? He replied: To love the Lord your God with all your heart.” (And right when the skeptics thought they were on God’s Honor Roll- Jesus continued): “But also to love your neighbor like you love yourself.”

Now that is diffcult.

Even if you are just starting from those you grew up with. How can I love a random stranger when I struggle with loving my own blood? My own relative? My own sibling?

Siblings indeed were designed to be a good thing. It’s in every culture and language. 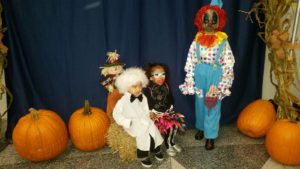 This is why when a betrayal of a sibling happens, it is extremely painful- to both parties, extended family and even much more to the parents.

But when the relationship actually does what it was intended to do (bring peace, loyalty and love) amazing things can happen and the glory of the Lord can be witness.

Recently I had the great pleasure of experiencing this joy with my children.

The moving truck reached its limit. There isn’t anymore room for anymore boxes.

Certainly, no room for a “replaceable” bike.

The bike that wasn’t making it onto the truck belong to my 7 year old daughter Scarlett, who had received it for her birthday.

This bike was no ordinary bike: It is the Little Mermaid Bike with purple and pink streamers. A fancy toy bowl in between the handles to create the illusion of the Mermaid being under the sea. And a bell that rang at Scarlett’s command.

My husband (who clearly didn’t pay attention to what the kids and I say: Pack The Mermaid Bike!) tossed the adorable bicycle into the dumpster.

When I had discovered my husband threw away our daughter’s bike, I immediately told him to go get it. He explained that there “isn’t any room” for that “replaceable” bike and he just wants to hit the road already.

“Okay.” I said. “You tell Scarlett what you have done.” My husband had a worried look on his face. How could he break the news to our daughter?

“On second thought- I will go back to the dumpster.” He said. (That is odd… extra space magically appeared on the truck.)

But when my husband returned, he came back empty handed.

Someone had dug through the dumpster and taken Scarlett’s bike.

When the news came to Scarlett, she immediately cried. “How could you daddy? I kept saying ‘my bike is the only thing I want to bring with us.'”

I tried to comfort my daughter and assure her we will buy her the same one. But that was just it. It wasn’t the same one from her birthday. From her memories.

The whole bike event was seriously one of the most saddest thing that had happen to Scarlett.

However, Scarlett wasn’t alone with her pain. My older daughter, Julie, also felt her pain. Her eyes watered up as she watch her sister cry and retreat into her bedroom.

It wasn’t even a “bratty” or “spoiled” cry. The cry, the sobbing was quiet and felt deep. A cry of betrayal and painful. Our last day at this home is indeed a dark one.

“Go to the store and get me a coffee please.” I finally said to my husband.  In reality, I just wanted him away for awhile. He hurt my daughter.

When he returned with my coffee, he informed me about Scarlett’s bike.

“Well. Yes. You know the neighbor down the road with those wild, nasty kids out front. They must have saw Scarlett’s bike in the trash and taken it.” He explained.

“Well, what are you waiting for?! Go tell them there has been a mistake. That bike is our daughter’s bike.” I spoke with such passion, I didn’t even wait for a response.  My daughter’s bike has been discovered! I rushed over to check up on my daughter Scarlett. Quietly, I opened her bedroom door to only come to witness such a sad scene.

She laid on her window sill, crying quietly with warm tears streaming down her cheeks. Her eyes were closed as she clenched to her doll. By now I was standing next to her. She didn’t even notice me.

As if I could read her thoughts, I knew she were praying to God. BUt something caught my eye…  I looked out of her window.

Oh my.. is that.. Julie! Julie is marching down the road! 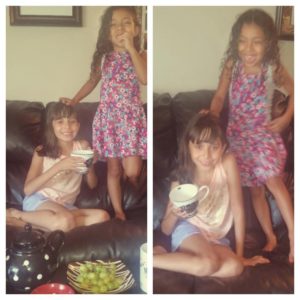 I ran towards the front of the house. My daughter Julie marched down the road, towards the neighbor house with her hands in a fist. (She went with my husband’s friend who was helping us move at the time.)

Then I couldn’t see Julie.

After what felt like time stop, it quickly resumed to catch up. I heard Julie ringing the bell of Scarlett’s bike.

Tears came to my eyes as I watched my brave daughter Julie pedal her sister’s bike.

“Scarlett! Scarlett!” Julie shouted as she kept ringing the bell and pedaling hard on the small bike. “Come out and play!”

Then I went back into my (old) home and found Scarlett at the same spot.

“Honey! Look out of the window! Look at what your sister has done!”

Scarlett sat up and stared out of her window. She couldn’t believe her eyes: Julie had retrieve her bike! But how?

Scarlett began to cry (again) but this time, in joy. She leaped off her window sill and dashed outside.

“What are you crying for?” Julie said with a grin to her sister. Scarlett  sob with laughter and disbelief. “Come over here.” Julie said as she waved her hand over at Scarlett. The sisters hugged as Julie got off from the bike and handed to her. 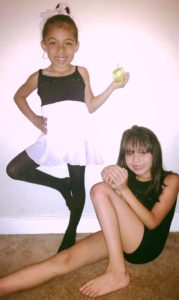 This story showed me God’s love, bravery and courage within siblings. If anyone knows my daughter Julie, she is NOT a confrontational person. She keeps to herself. Plays basketball and reads books.

She told me what she felt like marching down that path towards the neighborhood bully’s home. “I felt scared.” She admitted. “But, it quickly away. All I thought about was the pain my sister went through. I wanted to see her happy. I wanted to be the older sibling. And when I rode her bike back home, it felt great. This is what being a big sister is all about.”

Would you believe that before this event had happen- Julie said: “Man, I am so hungry right now… I would sell my birth right like Esau for a burger. He did it for stew. I prefer a burger. Plus being the eldest does have its troubles. I kinda need a break.”

Doesn’t God work in miraculous ways? Julie had this super-natural courage to go out of her character and rescue her sister’s bike. Rising up to the occasion of being the older sister…. and she didn’t even have to sell her birth right.

She ate a burger later that day.

This post will prepare for the next one: Eliminate the Death Tax.

2 thoughts on “The Bicycle: The Importance of Siblings”