Just in time! On Independence Day- most people would discuss about the Declaration of Independence from Great Britain on July 4th 1776.

Or what they will grill today.

But I’ve decided to talk more about the religious roots that help jump-start this War of Independence which John Hancock would sign off on what would become the most amazing break-up letter in history.

An important event of our country’s beginnings occurred on the voyage to the new land in 1620.

Two months out from England, the Pilgrims* who were riding on the Mayflower (an old wine ship) were becoming uncomfortable, restless and leading into eventual quarreling.

*Pilgrim is a traveler (literally one who has come from afar) who is on a journey to a holy place. Typically, this is a physical journey (often on foot) to some place of special significance to the adherent of a particular religious belief system.

On November 21, 1620 the Pilgrims drew up a social compact agreement designed to create a unified future government. They agreed in ‘just and equal laws,’ and upon Christianity teachings- the religious and secular governance of the colony to be in effect. This contract was based upon the Biblical covenant between God and the Israelite. 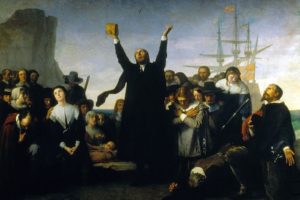 What is amazing about this action set on this optimistic and faithful tiny vessel in the midst of the powerful Atlantic- is that it was a document signed by all 41 ‘head of households’ aboard. Here, I believe, is the first time in history we have document proof of a country’s founding system and it’s reason behind it.

The people who signed this document was just a ordinary group of like-minded people with God as their witness- no king, master or any other authority agreement. Another remarkable moment.

The people on this ship had a mission totally different from earlier settlers who arrived on North American soil.

The original Virginia settlers had been gentlemen seeking adventure and united with the same goal: to better themselves socially and financially in this New World.

The Pilgrims were very different.

They came to America to create the Lord’s kingdom on earth. Sure, any gain was accepted and seen as a blessing from the God of Israel, but it wasn’t their main mission. The Pilgrims viewed Europe as their Egypt but unlike the complaining and ungrateful Israelites, (the new freed slaves) the Pilgrims will honor and get to work for His glory.

The European betrayal to Christian principles was enough of a motive to “cross the Red Sea” (Atlantic Ocean).

THE TWO KINDS OF AMERICANS

The two groups of settlers that are now situated in North America (The Pilgrims landing at New Plymouth, Massachusetts and the other group of settlers at Virginia)  are two types of traditions that will see conflict with each other and soon will battle it out.

When you look at the founding of our country America, there is no dispute it was a religious one. The events leading up to the War of Independence had much to do with religion. Most of all the Founding Fathers were religious men and those who weren’t (Thomas Paine) were found irritating, repetitive and a bore after a while. Even Thomas Jefferson, once his friend, turned his back on the atheist.

This video below briefly explains if and why America’s founding was designed to be secular or not. One thing to keep in mind is what Ben Franklin observed brilliantly:  Man is evil with religion. Imagine without?