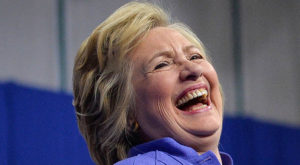 Yet the peaceful and tolerant Left Wing is calling for war…. again.

The same people who protested against the war in 2008 to help get Obama elected. They are heavily committed to the Democrat Party- whose leaders today once protest against the Vietnam war.

The Left Wing can be confusing. Aside for having no core values- they appear to flip flop every four years with their goals.

Take their stance with war. They were publicly against it, now publicly support it. Why?

If my memory serves me correctly, Obama  stood in Oslo, Norway in 2009- pledging to make the world free of nuclear weapons. (This still makes me gasp at the fact that people actually believed this. Even my 7-year old daughter was flabbergasted when she heard this lie. She responded with a question “Who does he think he is?”)

Then the champion of peace received his Noble Peace Prize just 30 days after being president.

People cheered. People cried. They hugged. They released balloons into the air and celebrated that their savior of peace has come.

Fast forward to today, I hear the Nobel Peace Prize Committee is asking for a return.

Because it has been bloody since the Prince of Peace Obama has taken his pledge.

Truth be told, one thing that has always been constant with the Left Wing is their mission of theft. 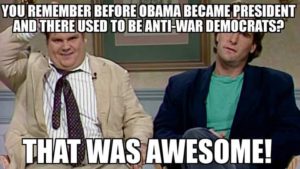 The Left Wing never actually changed their goal of power, control, war and death. They just embraced new strategies to obtain it.

When the anti-war protest began in 2008, it wasn’t for peace. But for Obama to get elected.

And when the anti-war protest began during the Vietnam War, it wasn’t for peace. But for cowardly men won’t be drafted into the war. The evidence of this is, when the drafting of men stop–so did the protest. As far as the war? It continued.

Now today with Democrats in power- how can they still hold up the image of peace while wanting to wage war with the rising East?

The Left Wing dresses up tyranny by calling it “humanitarian.”

However, recently the party of slavery has been more bold….

Hillary Clinton as Secretary of State with her NATO intervention in Libya, had betrayed the United States by allowing our flag to be the last one standing.

There has been many notifications of high alert terrorism in that area of which is known as Benghazi.

All other countries who had been stationed in Benghazi had left.

Clinton rejected the request for help and this resulted in our Ambassador getting murdered along with 3 other Americans.

There are many reasons she chose not to act. (But this one in particular should be highly concerning if she were to be the commander in chief.)

Hillary and Obama are progressive ideologues who will push their radical utopia agenda of what the world should look like- rather than seeing the world for what it truly is. They do this no matter of the painful consequences. Even if it means to sacrifice lives in the process because it is worth it to them.

Now Russia actually could have prevented the Benghazi attack with its veto powers using the UN security council. However, Russia operates in what is known as “The Old World.” This classic law in which is mutually understood: a country has only self-interest.

Moscow didn’t act on the night of Benghazi because of the understanding they received from Secretary Clinton: The United States will NOT use a ‘No-Fly’ zone over Syria’s air space.

As history will make anyone believe, enforcing a “No-Fly Zone” is really a pretext for a regime change.

And on Aug 31st, 2016 in Ohio, Hillary Clinton threaten to go to war with Russia if she is elected as president.

She also declared to place a “No fly Zone” and “Safe Havens” in Syria. This is AFTER her commitment to a Nuclear power Russia bear, that she wouldn’t do so.

To eliminate the anti-Assad (president of Syria) insurgents, Putin has deployed operation forces to prevent the Syrian president Assad from ending up like Gaddafi of Libya. (Whose blood is all over Hillary Clinton’s hands.)

And this is just a fraction of measures Moscow has been taking.

But what should be very concerning is the people who Clinton has a relationship with behind close curtains. Clinton’s close ties with George Soros poses a threat to Russia’s national security.

Soros, whose Open Society Foundations are considered to be one of the most highest threat for Russia- is a evil corrupt man. Soros Involvement of Eastern Europe’s “Color Revolutions” and starting a civil war in Ukraine are all worth noting. 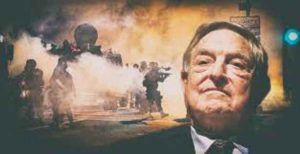 If you live in the West, you might have witnessed a mild version of Soros works if you seen the riots of his organization: Black Lives Matter.

This explains why Russia has banned George Soros, along with his “charities” from ever stepping foot in their country.

But George Soros isn’t calling it quits. Soros, along with the rest of the “Western Elites” will go as they please.

Even if it means using force.

Russia’s leader has instructed his military leaders to prepare for imminent war if Clinton is elected.

And while Obama is talking about how evil the right wing is, he also declares how noble it is to wage war with Russia after ruining any possible chances of good relations with Moscow.

Obama has terrorized Romania and Russia with his new missile system. The NYT (out of all resources) reported:

…..placing of these missiles increases the risk of nuclear war and directly threatens Russia…..

This violates the 1987 treaty that ended the cold war.

(As you notice. Criminals don’t read NO GUNS ALLOWED signs. Even if they were the ones who wrote the sign to begin with.) 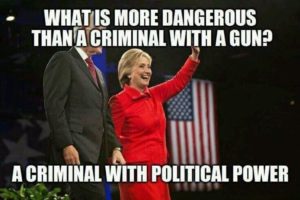 The dangers are endless under a liberal administration. With open borders, quietly bombing 7 countries behind the US citizens’ back and fighting wars to lose- not to win, is all too dangerous.

Personally, I am a risk taker. But voting for Hillary is suicidal.

And how are the Liberals able to get away with murder?

The media will never expose the war crimes of the Left Wing simply because it is they who control the media.

They have removed patriotism.

They have removed faith.

They have removed man.

And no matter how big or many war heads the United States has.

If we fight a war with no faith. No belief. And no love….then we should go back and learn a History lesson on why the British lost the War of Independence to a few men who had passion, faith and God.