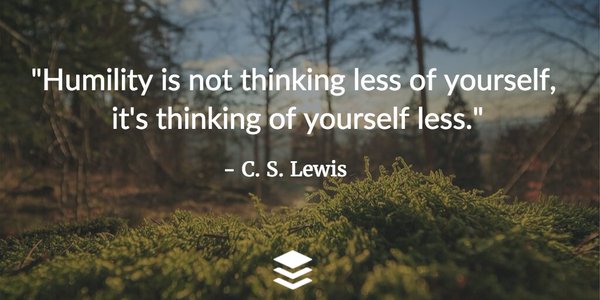 If you constantly have to broadcast how great you are in sports or in any other field, then the chances are very good that the reason you’re trying to convince other people is because you are really trying to convince yourself by repeating it.

This boasting of oneself is actually a form of insecurity. Arrogance comes from weakness.

If you are the smartest guy in the room, then you are in the wrong room. Part of life is learning- and if you already know everything, then you aren’t living.

A person must always continue the growth while living. One way to help create new innovations or develop your skill masterfully is by surrounding yourself by other people who knows more than you. This also creates meaningful relationships, respect and value for one another. Which is a desire of man: Human interactions. The bible mentions the benefit of one having humility:

Another way of changing your thoughts and then behavior to establish a more graceful humility is by using the one personification of the fictional character Uriah Heep created by Charles Dickens.

One’s own sanctity, gifts, talents, and accomplishments for the sake of receiving praise or adulation from others.

In this context legitimate humility comprises the following behaviors and attitudes:

From my experience, it’s not in my nature to boast. I’m more of an observer of people’s behaviors and study on what causes them to act in such a way. I also understood at a young age not to be quick to judge and always hear both sides of a story when making a decision about which side I chose. Understanding this, I came from very humble beginnings and worked my way up through life. Going through this had a heavy impact on me to the point of this realization: I do not want to go back to where I came from, so I also remember where I came from. If I get too full of myself- that utopian hell awaits.

However, I am constantly witnessing the suicidal behavior one takes when they lack humility. Then tragedy strikes on this person’s life–(something totally preventable but also predictable) all in the name of pride.

Bragging. Snobbish attitudes that are soon confronted with the harsh reality: They aren’t that intelligent. Or pretty. Or rich. Or clever. Whatever they want to portray, the exact opposite reveals and exposes on the poser hard for the world to see.

I am not suggesting that I haven’t made mistakes throughout my life. But what I am saying is that how I responded to the mistakes actually help build and continues to build my character.

This helped me tremendously and saved me from many years of heart ache.