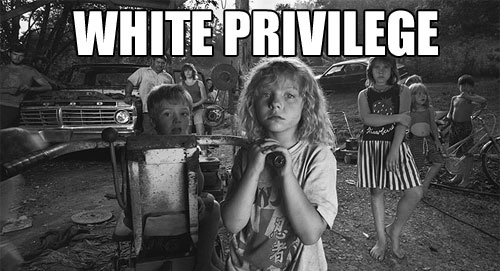 What is White Privilege?

According to Wikipedia, White Privilege is a term for societal privileges that benefit people identified as white in Western countries, beyond what is commonly experienced by non-white people under the same social, political, or economic circumstances.

Then to expand on this definition, according to Peggy McIntosh, “whites and white skinned people in Western societies enjoy advantages that non-whites do not experience, as an invisible package of unearned assets”

Under this theory, white skin lives a privileged life because they were born into the skin color of advantage. If a fair, light or white skin person achieve or received anything in life- it is due to the inheritance of their genes. Not because they personally earned or worked for it. They have an advantage, better quality and a head start to a successful life.

Therefore, white people are holding back other skin colors to experience achievement.

Cartoon above implies white people not only have it “easier” in life, but they are clueless about it. Notice the woman’s face reaction. This creates anger and hurt over the lies of white privilege. In reality, life is what you make of it. You should be rewarded or punished based on the choices you make in life.

What then, is the solution to end this privilege? For the people of all backgrounds can “equally” enjoy these advantages?

Apparently this privilege and honor of white skin seems more like a curse. There must be a way to end this “privilege”. But how?

First let me start by saying, I do NOT believe in the idea of white privilege. Frankly, it is insulting to everyone of all skin colors–including whites!

When you tell a group of people that they are in a higher status/ class simply because of materialistic means (ex. the color of ones skin) – they tend to become arrogant and have a sense of virtue for doing absolutely nothing. A status, rank or promotion in life is earned. (If you were born into wealth- you STILL wouldn’t be respected by the world UNTIL you EARNED that respect.)

And if this group does perform “positive” acts (ex. donating to charity, tutoring to a low in come child or part taking in a march to raise awareness) they are only doing these acts for self-satisfaction. To get rid of the guilt they have for being born “lucky.”

It is never truly about service.

What the unprivileged skin color groups are receiving is a repayment,  pity and lukewarm “help” from the honorable skin color.

This is also robbing white people as well. It is removing their compassion, creativity and relationships with other people. This is damaging to a society.

When one group of people feel they are privileged simply because they hit the jackpot of having white skin, the other groups who aren’t as lucky become jealous, insecure, angry and weak. This creates more divide and racism…from BOTH parties.

Now, if college professors, society and the Main Stream Media are promoting this idea of White Privilege- what exactly is their solution on tackling this oppression? They offer these steps:

A. If you are white,  you must first acknowledge that you are considered lucky to be born with that skin color since you don’t have the same struggle as other skin colors.

B. Being that you don’t have those struggles as other skin colors, you must be understanding and (sublimity) separate yourself from those communities that don’t reflect what you physically look like.

C. Lastly, since you are a beneficiary of high status, you must pay back. Through volunteer work or paying more/higher taxes.

Obviously, this isn’t about ‘helping’ minorities. This is about division and taxation. If a person is a beneficiary of white privilege- they admit that they have done nothing to achieve their status of privilege. (Socialism. And perhaps those who promote this idea of white privilege would like it to remain that way. )

This is completely hypocritical.

If you claim that white privilege is real, then there shouldn’t be ANY poor whites. Any single white moms. Any whites on drugs. Any over weight whites. Any criminal whites. Whites Should be immortal! Whites reminds me of saints… so how can non-whites even dare consider to work with whites? (White supremacy. Then the degradation and collapse of the morality of the country. We were created to connect.)

There is another hypocrisy going on here: If you claim that your ancestors did cruel and savage behavior to non-whites in the past to achieve their status–then YOU are part of that game!

Why? Because you just admitted that you are in possession of stolen goods! Do not lecture others to give away their wealth and earnings while you are still holding onto yours. But you say you don’t mind paying the higher taxes as a compensation for the non-whites loss? Great! Let’s start with a 100% tax…..with you. Then when that no longer satisfies, death is a great way to clear debt.

The truth is, NOTHING can repay for the sins of the past. Only if humans can learn from history. But history has a funny way of repeating.

If you truly want to help or care for your fellow human being, then help them become independent. One way is to model that lifestyle yourself to help inspire. Then create jobs. Invest in those individuals (of ANY skin color) who PROVE that their mind and character is worthy.

People’s Own decisions in their personnel life is their results. YOU control your destiny. Even if you were born into rich or poor, black or white- YOU decide on how successful you can be.

The only privilege and head start in life is being born American. Under the US Constitution, ALL Americans,-regardless of where or how they look- CAN become successful If They Chose To Be.

Take advantage of that.